Top 6 Signs of Autism in Infants

Top 6 Signs of Autism in Infants

Among the many worries new parents face, mental and developmental problems may be one of the biggest. Autism especially can be difficult to live with, stressful, and emotionally challenging. At our child care center, The Pillars Christian Learning Center, our teachers are trained to recognize the signs of a child with autism. Even though children commonly aren’t diagnosed with autism until around the age of three, there are signs to look for as early as six months. Keep reading to learn more about common signs of this developmental condition.

Lack of Smiling and Gesturing

What parents want to see most is a look of recognition followed by pointing and a big, happy smile. A baby’s reflex smile will go away by two months and real smiles should be present somewhere between the age of two to three months. If big smiles aren’t a daily occurrence by the age of six months, it could be a sign of autism. Gesturing is important as well. Whether it’s pointing, waving, clapping, or reaching, these motions should be everyday actions by the age of nine to 12 months.

Playing “peek-a-boo” without getting a reaction doesn’t happen very often for infants. Children are constantly making faces, trying to imitate sounds, and laughing at just a few months. It shouldn’t be hard or rare for an infant to make expressions or who doesn’t seem interested in following movements or noises by the age of nine months. 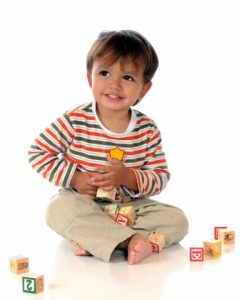 Delay in Babbling and Cooing

A baby doesn’t need to be a social butterfly to be seen baby talking to parents, siblings, or other babies. Babbling, cooing, “talking,” or imitating noises should be a staple of their day by the age of 12 months.

A baby will typically have some sort of reaction to his or her name by the age of a few weeks old, even if they don’t realize that it is their name is being called. Somewhere between the ages of five and seven months, most babies will recognize that their name is referring to them. Many parents may believe that the infant has a hearing problem and don’t even consider autism.

Child development varies from infant to infant, but holding onto a toy should happen around the age of three to four months, rolling over should happen by the age of five months and crawling should occur between six and 10 months. A lack of these crucial motor skills could have various causes but consult with a doctor to determine if it is autism.

From child development to toddler education and continued learning, the progress of your child is a priority to all of the teachers at Pillars Christian Learning Center. Our child care strives to give care and attention to each of our students, both young and old. To learn more about our day care’s education programs, give us a call today.

About the Author: Micheal Tasner